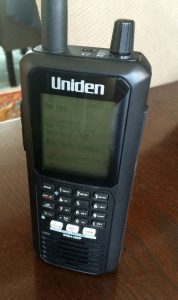 The full title of this post should really be something like “How to update a Uniden BDC436 scanner using a Mac and run the Windows Sentinel software WITHOUT running Windows on
your Mac.”  Last year I bought a Uniden BCD436HP scanner figuring there’d be all kinds of interesting things to listen to here in NYC.  Guys need gadgets, and this is a very cool one that could keep you busy for quite a while.  It can pick up aircraft, police, fire, business, utility companies, etc., etc.

I’d been thinking of getting a scanner for a while since there is always so much going on here, and in a crisis the news is often way behind what is actually happening.  Sure there are web sites that stream local scanner feeds (for instance broadcastify.com) , but they don’t provide the enormous range of frequencies available with an actual scanner.  Plus there is just something fun about playing with buttons and listening to actual radio broadcasts.

When I was a kid, scanners were simple and covered just a few frequencies.  Nowadays they are insanely complicated, and even though I’m technically inclined, I hesitated buying one based on what I had read about them.  Then came the Uniden HP-1 and soon after the handheld BCD436HP in 2014.  These units contain a huge database of frequencies on an internal micro SD card, so all you do it put in your zip code and you are ready to go!  The only problem is that the database is continually updated, and you can only load new versions onto the scanners using a Windows program called Sentinel.   I’m a Mac guy with no desire to run Windows on my computer via Virtual PC or some other method.

Anyway I bought my BCD436HP well aware of this limitation, hoping at some point someone would figure out how to use it with a Mac.  Well sure enough someone has.  Yesterday (1/29/15) I decided to research this again having not thought about it since last winter.  I came across a post on the Radio Reference forum web site by a user nicknamed “yancmo” explaining how to run Windows Sentinel  software on a Mac and update these Uniden models.  I don’t know how I missed this post since it was dated early 2014.  Anyway the post described this method working 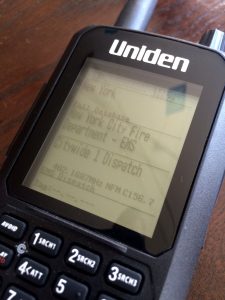 on Mavericks, so even though  I am running Yosemite in my iMac (Mid 2011) I thought I’d give it a try.  The interesting thing is that to do this, an application called “Winebottler” is used that let’s you run Windows apps on the Mac without actually running Windows.  I’d never heard of this program, but it could open up a lot of possibilities.  Anyway I followed the instructions to the letter, with the exception that I downloaded the newest development version of Winebottler intended to run on Yosemite. I installed everything, took the  Micro SD card out of the BDC436 and connected it to my iMac with a USB card reader, and was able to successfully update the database to the most recent version!

For those with a BDC436HP scanner who want to update it from a Mac, I am re-posting the instructions from the forum since they were so helpful (a big thank you to Radio Reference member “yancmo”).  WARNING: The first time I tried updating my SD card, I did something wrong which rendered it unreadable by the scanner.  Not good.  I’d only try this if you don’t mind if you accidentally  disable your scanner and have to find a friend with a PC to get it working again.   Also I can’t really answer questions since I simply followed the instructions in the post exactly as written.  You’d be best off on the Radio Reference forum for more info.  Anyway below is a re-print of the directions.   If it works for you, it would be great if you could leave a comment.  Time to play with my scanner.  Sitt’n time!

3. Launch “Winebottler” from you applications folder. Follow prompts for install. This will install any needed files to run the apps later.
a. Click “Advanced” in the top bar.
b. Select “new prefix” default
c. Program to install: “select File…” and select the “Setup_BCDx36HP.msi” in the Sentinel folder on your desktop.
d. check “This is an installer, execute it.
e. in the “Winetricks” section, click in the search field and search for “dotnet20”. Check the MS .NET 2.0. (this will install the .net for the Sentinel to install)
f. Click “Install” button. Save to your desk top as Sentinel.
This is now creating a windows app that will run on your mac using “wine”. It will install the Dot Net files and you will have to agree to terms and tell it where to install. Defaults will be fine. That will finish and then Sentinel will star the install. Again, agree and save to defaults. This part does take some time so bear with it. (HINT: sometimes the installers will pop up in the background. You may have to click the doc to bring it forward to agree to the DOT NET terms etc…) Once the files are installed, the last step is to “Select Startfile” leave it on Program Files/Uniden/BCDX…… and when you click the “Sentinel” app it will launch the app. Hit OK and your done. Now double click the newly created app and your ready to run Sentinel on your mac.

Please let me know how it works for you and if you can verify that it will work with USB. Of course I’ll try it out when I get mine and post back ASAP.