I love my Mackie HR624 monitors.  Let’s face it, guys need speakers.  Bi-amplified with 40w for the tweeter, 100w for the woofer, a passive radiator, selectable equalization for various speaker placements, phase correction, extremely flat response…what’s not to love?   When I am enjoying some morning sitt’n time with a nice cup of joe in my hand, I like to crank them up (along with an BagEnd ELF subwoofer system…flat to below 18 cycles) and enjoy some tunes while checking email.  I also use them for music and video production monitoring and they never fail to provide an accurate representation of the source material.

I bought these speakers maybe eight years ago and they have performed flawlessly…until a year or so ago that is.   These speakers have a circuit that automatically turns on the amplifiers when an input signal is detected, and you can see the pilot light on the front panel come on when this happens.  What happened was that one of the HR624s started having trouble turning on.  The pilot light would flash on and off a few times before the speaker would finally stay on.  This gradually got worse and worse, taking longer and longer to switch on, until a few weeks ago when the speaker would not turn on at all.  OK time for some sitt’n time…with Google open on the iMac for some searching for others with similar problems.  Sure enough I found a site which identified C65 as the culprit (that page no longer appears to be online unfortunately).  C65 is a 63v 4.7uF electrolytic capacitor and I found an ebay dealer who sold me twenty five of them for about $8.  OK time for some speaker surgery!

Note: I am going to describe how I repaired my own speaker since it might be of interest, but I am not encouraging you to try this yourself.  These are the original 624s were long out of warranty.  I used to work at a recording studio as a tech and have some limited experience making basic fixes to various kinds of audio equipment, but you could probably wreck your speaker if you did this incorrectly. 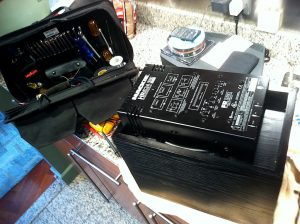 I did this work in our kitchen with a towel on the counter and the 624 on its face so I could easily access the amplifier module on the back (unit unplugged from AC of course).  To remove the module I needed a Torx wrench.  I don’t remember the exact size, but if you don’t have a Torx you can buy a set at a local hardware store.

When I got the module off  I found capacitor C65 pretty quickly, but in order to get to the back of the circuit board where the solder traces are it looked like I’d have to completely disassemble the amplifier module. Not something I wanted to try.  With nothing to lose since the speaker was broken anyway, I bent C65 back and forth until its leads broke off exposing the two small holes in the circuit board and the solder in each (you can click on my photos for larger versions)

I then took one of the new capacitors I had purchased, trimmed the leads down to a reasonable length, clamped the leads in a heatsink (to avoid heat damage), and gingerly tinned the leads leaving a tiny blob of solder at the end of each.  Finally I positioned the new capacitor leads so that they were resting on the solder/holes from the old capacitor.   Since this was an electrolytic capacitor it was important to note the correct polarity.  In the this case the negative side was facing the big toroidal transformer.  An LED tactical flashlight positioned to shine into that area was critical to really see everything clearly (guys also need high-lumen tactical flashlights).

Finally using a fine tip Weller soldering iron I very carefully melted the solder in the holes along with the blobs on the leads.    The result was a pretty decent soldering job with minimal dissassembly.  After re-assembling the speaker I was happy to see that it worked perfectly!  It now turns on and off exactly as it should and hopefully will last for several more years.  Time to listen to some tunes.  Sitt’n time.